I had to go up North last weekend. Sadly my Stepfather was very ill and we went up to say our last farewell on the Saturday.

Sadly a few hours after we saw him he passed away. However, as he was 102, not entirely unexpected and he'd had a pretty good innings. We stayed up North for a few days to support my mother.

Whilst up there, the wife wanted to see some more of my old haunts. So on the Monday we went up to the Macclesfield canal at Poynton, where my father kept his Dawncraft cabin cruiser.

Now the last time I was on board that boat was 30 years ago and I know it had gone through a few different owners and most likely wasn't still at Poynton, so the last thing I expected as we had a walk up the towpath was to meet it again.

But meet it I did: 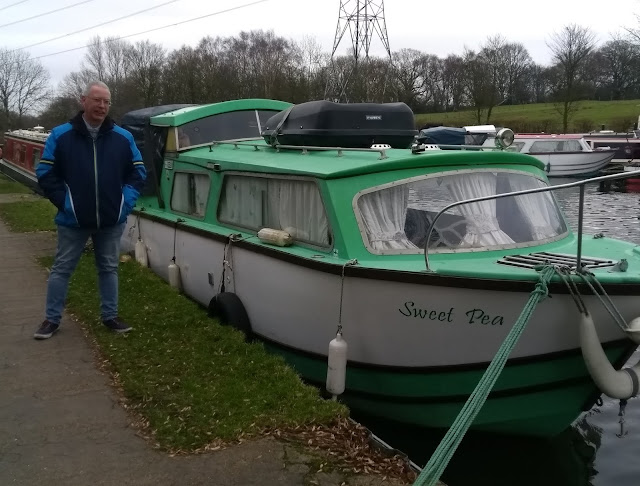 Not bad for a forty year old cruiser (dad had the shell delivered to his back garden for fit-out around 1980), especially as you see so many of the same vintage on scrapheaps. It's nice to see it's still around and being cared for.

I went to see my father later that day for lunch and he was amazed and quite happy to see it still around.

So thankfully a happier ending to a sad weekend.

Mark The Skint Sailor
Portsmouth, Hants, United Kingdom
Hi I'm Mark, a 50-something who spends most of his spare time doing stuff with his Sea Wych 19, or helping his mate Jim with his Valiant 18 Yacht. I blog to promote the Skint Sailor Ethos: you can run a boat cheaply if you are canny enough. I started messing with boats as a kid on the Northern canals. Boats were the first vehicle with an engine I ever took charge of. Inland Waterways are too regulated and expensive. Now I mess about on the sea where things are a lot less restrictive.