Round The Island Race

This Saturday morning, around 1500 boats will line up for the J.P. Morgan Asset Management Round the Island Race.

You can watch the start and finish via a streaming service on their home page here: http://www.roundtheisland.org.uk/web/code/php/main_c.php?section=home

I watched it last year on the TV and the sight of so many boats vying for position was great. The starts are staggered for different classes so you won't get 1500 boats all at once, but still 150 boats jockeying for the best start is a great spectacle. Pity those that do a false start and scupper their chances. Can you imagine trying to turn round and cross the start line again when 150 boats are bearing down on you?

All good fun. If you're up early on Saturday morning and can stream it, it's worth a watch.

I'll be there on the sofa with coffee and bacon butty in hand.

The best sort of armchair sailing....

Posted by Mark The Skint Sailor at 15:53 No comments:

Some Work Done at Last

Yet another grey, windy Sunday.... when will we get a decent weather window at the weekend?

Anyway, there was nothing for it and I rowed out into the gale and made a start on the starboard locker top, which had delaminated badly.

Anyway, I cracked on removing the old locker top and the piano hinge. Not hard, the plywood had delaminated so badly it pulled off the hinge.

No photos until I completed the job, so here's the new top in place: 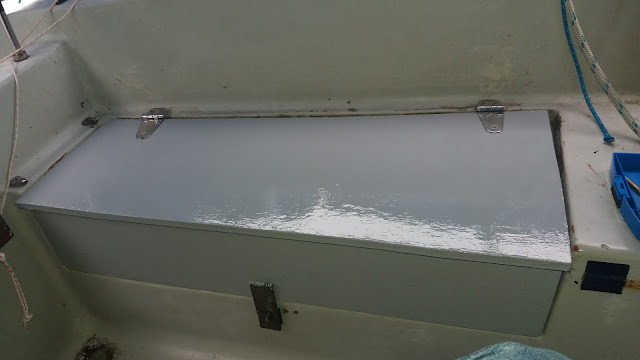 I drilled the new screw holes with this: 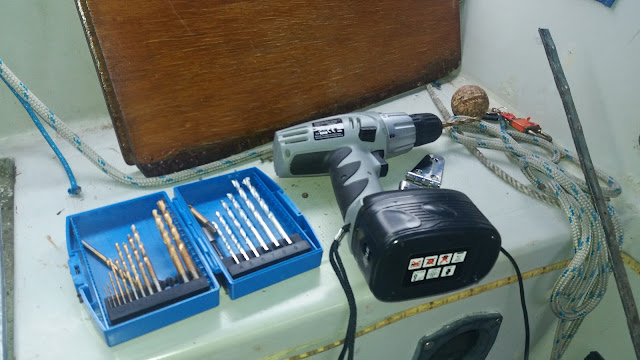 Remember it? My 12v wired power drill. Works a treat off the boat battery, no recharging needed.

The plywood is so thick that I had to space the hinges off the edge of the cockpit, so they look a bit odd from this angle: 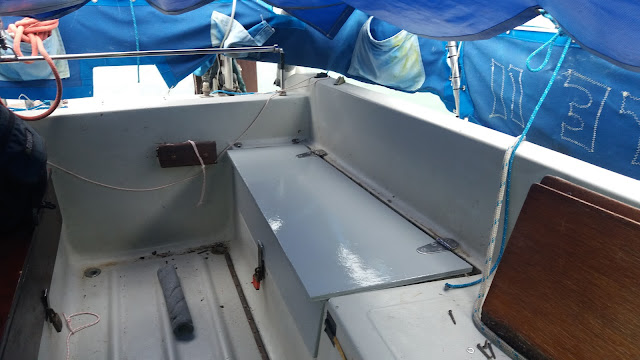 But, two hours after getting on board I had a new spiffy locker top. The port side is not as badly delaminated, but I will get around to changing that too later.

I did a flyby past the boat today. Not onboard as the weather was looking a bit naff all day.

I spotted this boat with a bit of a list on and quickly posted it up on the Facebook Solent Sailors group: 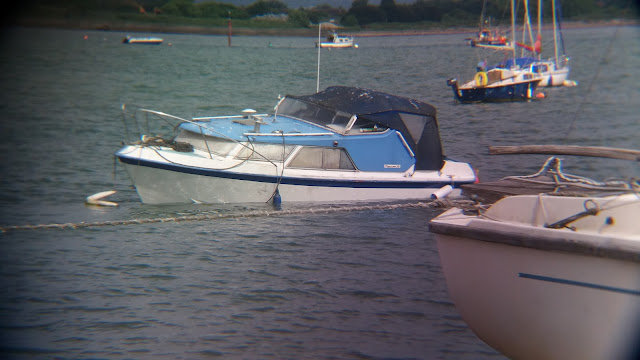 Sadly later on Ben posted this picture on Facebook: 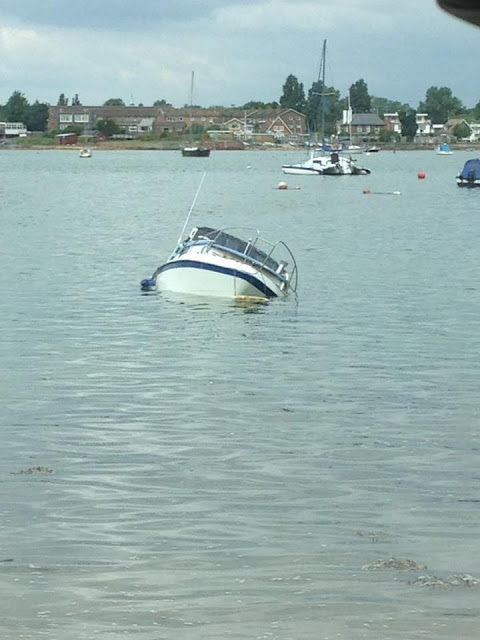 Yet another boat bites the dust at Eastney. And the wife wonders why I go down and check on my boat every couple of days. Too many boats get left unattended for weeks or months at a time down in the pond and just end up trashed.

Death of a Kingfisher 20 and More Boat Clearance.

This is all that is left of the Kingfisher 20 that foundered at the top of the harbour, the one I took the video of. 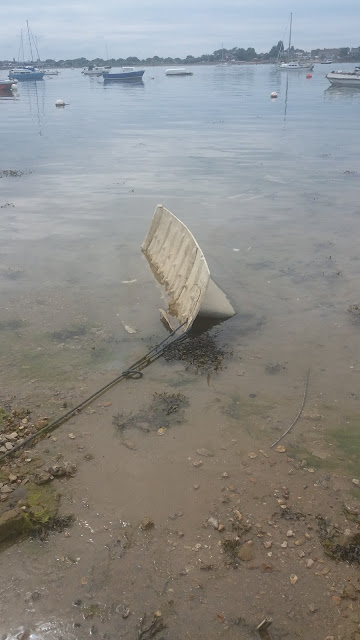 The last time I saw it, the boat was on the beach at Eastney. I was walking down the beach yesterday and came across the remains after it had been cut up.

Also the pile of old boats down by the bus stop at Eastney have been cleared, That's around 4 boats gone.

You can see the harbour clearly now, no wrecks in the way.

Also the big abandoned fishing boat by the ECA slipway has been taken away by the Harbourmaster. They took it last Sunday.

This weekend I spent time chilling on the boat on Saturday but the weather was a bit too unsettled on Sunday. I woke up and it was raining, so I didn't go down to the boat jumble at Littlehampton.

No boat stuff as I decided because of the unsettled weather to stay at home and do aquarium stuff instead.

No, not an article about some miracle piece of equipment, but Top Gear, the TV show.

I went to the studios to watch the show being made this Wednesday. I've watched a few shows being made, it's an occasional thing when we get the offer of free tickets through the applause store for a show we really want to go and see.

The opportunity arose for Top Gear. It's a show that interests me and I wanted to see if the rumours of chaos in the studio was of any substance (which they aren't, by the way, things were pretty slick in the studio).  The only thing I'd like to see is some presenters with charisma. The main duo of Chris and Matt are fine, even Sabine Schmitt has unusually for a German a sense of humour, but the other presenters... who are they, and how did they get the job? I've no interest in them. Maybe if they'd been properly introduced, and maybe their car-related history bared for the population we'd have more of a connection, but for now they leave me cold. Don't know who they are, not interested, I don't even know how they got the job or how qualified they are to do it, unless they are just there to tick the diversity box. I assume one must be gay then.

Well, like any news story, its probably more fabrication than anything. Things went ok in the studio and more importantly stepdaughter Christine got to get within smelling distance of Matt LeBlanc. He also waved back at her when she waved to him outside. A highlight of her life apparently... she leads such a sheltered life. :-)

Anyway, as always it's interesting to see how these things get made. What you see on the telly is the result of literally hundreds of people being involved. I'm not talking about the audience (of which there are hundreds) but The security, catering, studio floor staff, the administrators, producers, etc. involved in making a couple of people the focus of a 1 hour TV show.

Couple the local stuff with the outside recordings they do across the world, it must cost an obscene amount to produce the show... just think what a resourceful skint sailor could do with just a fraction of that. World Cruise anyone??

In fact it surprises me there aren't any programs out there dedicated to boats and boating. I mean, there is so much diversity when it comes to boating: Sailing, from Skinters like me, up to the Multi-Million Squid super yachts, the actual super yachts, power boats, dinghies, Commercial boats, canal boats, the broads..... the list is endless.

Combining the program with a round the world race, with weekly live chats to skippers, visiting the ARC when it arrives in the Caribbean, the Jester challenge when it arrives in the Azores or wherever, chasing the live-aboards round the world... basically everything and everywhere. Investigative reporting could look into why keels fall off so many expensive yachts, kit could be reviewed.

There are enough characters in boating to interview as well.

The Round the Island race, with thousands of boats confined in the Solent, is a spectacle made for telly, but it surprises me that not one TV channel covers it.

Last weekend I decided to take things easy. No pressure, no rush. Saturday morning first thing I took the Wife down to the car boot sale at Bedhampton. The first one of the year. I do have an ulterior motive: there are usually a couple of guys selling boaty bits at that car boot. As it turns out they were there again this year, one chap selling a few small anchors and lots of rope, which seemed to get snapped up quickly.

After depositing the Wife back home I went down to the boat. This time with no plans, no jobs. The idea was to de-stress and just people and boat watch while soaking up the er, overcast.

Sunday again I went down to the boat with no plans other than to quirt some carb cleaner into the outboard and get it running better. This time by the time I got down there it was almost high tide. Jim was already there so I got the outboard running and then reversed up to his boat and tied them together so we didn't have to shout to each other. 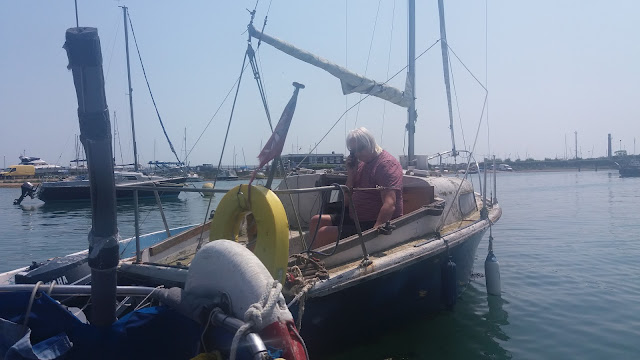 Glorious sunshine all day and a good natter with Jim. What a great day!

Posted by Mark The Skint Sailor at 09:20 No comments:

Despite last weekend being a long weekend with the Monday being a Public Holiday, I didn't get down to the boat.

Typically Saturday and Sunday were the nicest days of the year so far weather-wise.

In contrast Monday was pretty grotty, with F4-F7 winds and a Northerly bringing colder temperatures and a swell in Eastney Pond.

So Monday I added another coat of undercoat to the locker tops. I'm up to 3 coats now. Once more and then I can start with the top coat.

Then I worked on the neglected garden and set to mowing the knee-high grass on the lawn.

That's about all there is to report at the moment, hopefully over the next couple of weeks I can do some boaty stuff. Especially finish off the locker tops and get them fitted.

The year is running apace and I've only managed a couple of small sails so far. Not good.

Mark The Skint Sailor
Portsmouth, Hants, United Kingdom
Hi I'm Mark, a 50-something who spends most of his spare time doing stuff with his Sea Wych 19, or helping his mate Jim with his Valiant 18 Yacht. I blog to promote the Skint Sailor Ethos: you can run a boat cheaply if you are canny enough. I started messing with boats as a kid on the Northern canals. Boats were the first vehicle with an engine I ever took charge of. Inland Waterways are too regulated and expensive. Now I mess about on the sea where things are a lot less restrictive.